Shireoaks Marina is a relatively new and large marina on the Chesterfield Canal, situated in the little village of the same name, a few miles west of Worksop.

The Marina was opened in May 2000, along with an eight mile stretch of restored canal west of Worksop. Formerly the site of a barge loading area and the settlement pond of the Shireoaks Colliery, it was created as part of the canal restoration, itself part of a wider regeneration scheme after the closure of the British Coal colliery in 1991. The marina is operated by British Waterways – details of moorings etc from the Newark office – telephone number as above.

The marina offers visitor, residential and non-residential moorings, and provides about 60 secure berths with ample free car parking, toilets, showers, water and electric charging points, refuse and elsan (ie chemical toilet) disposal, a telephone and post box and pump out service. The cost of the moorings is around ?70 a metre depending on the type of mooring required. The basin is very spacious and also provides a winding (turning) point for boats. There is CCTV covering most of the marina.

There are also some facilities nearby in the village of Shireoaks, including a railway station on the Sheffield-Worksop line, a post office and newsagents, a small general shop and a butchers. Alas, the pubs in the village have recently closed, although there are some good ones in Worksop.

It’s not the most scenic of marinas – no historic buildings and the like – but this stretch of canal is very attractive and very quiet, given that the end of navigation is just a few miles upstream (there are plans to reconnect it to the remainder of the Chesterfield canal at Chesterfield.) Just to the west is an impressive series of locks, including two double locks and two triple locks, leading towards the current head of navigation at the entrance to the disused Norwood Tunnel. 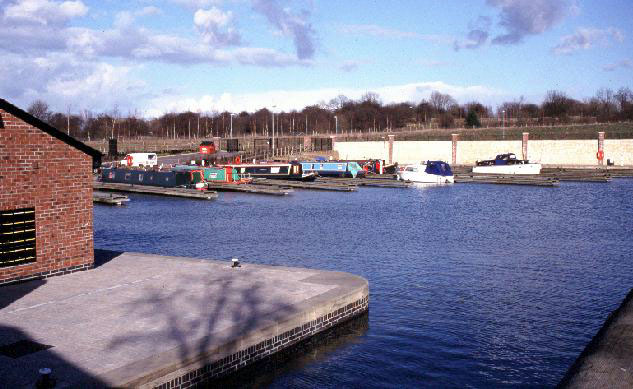