Welcome to the website of Marine Services (Chirk) Ltd, we are a family run business operating two inland waterway marinas. Chirk Marina on the beautiful Llangollen Canal is situated in the middle of the 11 mile canal corridor granted World Heritage status by U.N.E.S.C.O. in July 2009, only the third site in Wales to achieve this status and putting it on an equal footing with such iconic structures as the Taj Mahal and Statue of Liberty.

At Chirk Marina we offer a wide range of boatyard services including moorings and boat sales. We are also excited to offer a prestigious new hire boat holiday fleet, Crest Narrowboats, who will be hiring out of Chirk Marina and our sister Marina at Festival Park from March 2010.

Festival Park Marina Etruria in the middle of the historic Potteries offers you no less a choice of history and dramatic scenery situated, as it is, on Brindley’s Trent & Mersey Canal. And again we offer a host of services from this ideally situated Marina. 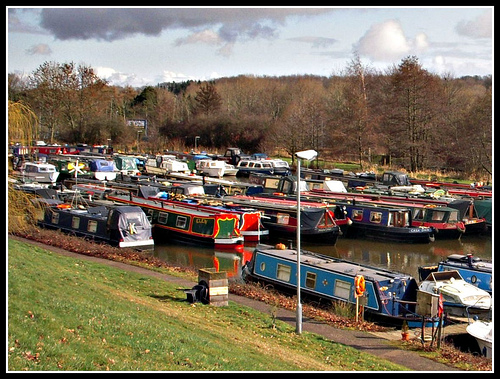 Is Whixall home to Britain’s most rural canal marina? Journey down the Prees Branch off the Llangollen Canal, surrounded by fields and farms, framed by mighty oaks close by important nature reserves, and hear the dawn chorus and laughing water fowl greet another day. Here you will find Whixall Marina – a tranquil haven for painted boats.

The historic town of Whitchurch is but a few cruising hours away, and the meres at Ellesmere are also close by. Voyage further on into Wales and bestride the Dee Valley on Telford’s majestic World Heritage Pontcysyllte Aqueduct and let the delightful International Music of the Eisteddfod town of Llangollen reward you with its welcome.

At Whixall Marina the boater is well looked after. You will find modern berths with water and electric hook-up, a shop and chandlery, diesel sales, pump-out, elsan disposal, Wi-Fi, a slipway, drydock, launderette, toilets, showers and secure parking for your car. Most importantly you will find relaxing peace and quiet.

Swanley Bridge Marina is a brand new 315 berth marina. This pristine development is located on the beautiful Llangollen Canal just two miles from the junction of the Shropshire Union.

Our rural setting includes 10 acres of water and a seven acre wood, providing a spectacular environment to moor your boat. We are only two miles from the market town of Nantwich in Cheshire and easily accessible from the M6 motorway, just 15 minutes drive away.

Cheshire offers a wealth of tourist attractions, with Nantwich itself enjoying a number of local festivals throughout the year. Please visit our local attractions page for more information.?

I drove up to Swanley Bridge marina last week (early July 2012) to pick up an engine for Calcutt Boats. I only had half an hour there so I didn’t have a chance to look around the marina properly. I was there for long enough though to take a few photo’s and have a walk around the marina basin.

The marina is just to the west of Nantwich and just a fifteen minute drive from the M6. It’s close enough to the motorway to make travelling easy but far enough away from any major road to ensure that it’s peaceful. The sense of tranquility is enhanced by the long private road past a farmyard and up to the marina.

The marina is just a few years old but its location on an established farm surrounded by mature trees – including a seven acre wood – gives the impression of moorings that have been established for much longer. The two buildings look new though; the office, shop and chandlery “The Boat House” and the ammenities block which houses the toilets, showers and washing machines. 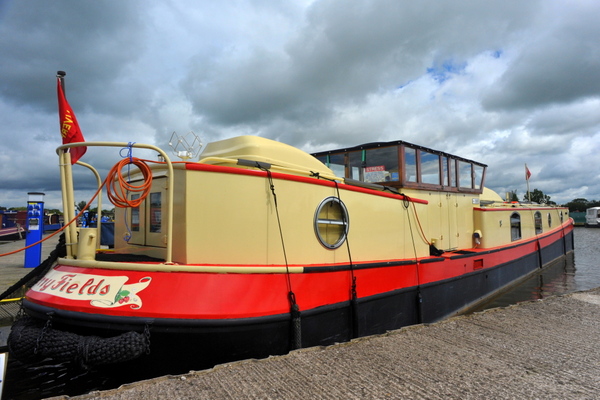 Although there are no residential moorings specified anywhere on the marina’s web site, there were indications that some of the narrowboats there had full time residents. You would need to check with the marina for a definitive answer.

Swanley Bridge marina has a lot to offer; you can enjoy a well equipped mooring in a tranquil location right at the heart of the canal network. What more could you ask for? 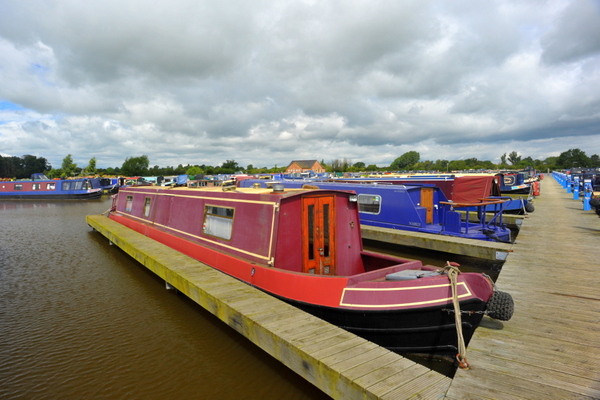 Blackwater Meadow Marina is located by the Llangollen Canal on the outskirts of the beautiful market town of Ellesmere in Shropshire which dates back to at least Anglo Saxon times.

The attractive marina is well equipped with a shop selling boat spares, canal maps, guides and confectionary. On the site there are boats for sale, mooringswith electric hook ups, wi fi and full marina services including a dry dock for out of the water repairs.
The marina is operated by ABC Leisure Group one of the leading companies on the Uk canal network who have another eight marinas strategically placed around the canal network, they have an excellent reputation for building high quality bespoke narrow boats, and can provide everything for the canalboat owner, or potential owner . 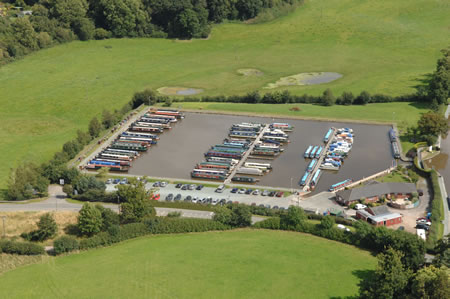 Blackwater Meadow Marina is a comparatively new marina situated close to the junction of the Ellesmere Arm on the busy and ever popular Llangollen Canal. The site was developed in the mid 1990’s by Mick Bridges and his wife Christine who fitted out boats and ran the marina until they sold it on 1st August 2002 to the present owners Waterways Property Portfolio (WPP) Ltd. Jamie Hill is the Managing Director of the marina and is also a director of Canaltime but the day to day operation is in the hands of Neil Huggon, the Marina Manager.

Neil had previously worked as a company director in an engineering distribution company in his home town of Barrow-in-Furness. When Neil started with this company it was associated with the shipyard there, which in 1972 had about 14,500 employees but with the decline of shipbuilding the yard had no more than 5,000 remaining by the time he was made redundant three decades later.

Before he started at the marina in June 2003 Neil’s only previous boating experience was competitive sailing in the Irish Sea. His first trip on a canal was just a week before he started at Blackwater Meadow Marina when his Managing Director arranged a few days trip from Sawley Marina to Burton-on-Trent. This trip, with a friend from his home town, proved an enjoyable introduction to canal boating and Neil was impressed by the tranquillity of the experience and the quality of the boat.

Although close to the centre of Ellesmere the marina is in a quiet rural setting and provides moorings for just under a hundred private boats of all sizes from small cabin cruisers up to 60 foot narrowboats. It is also one of the bases for the ubiquitous Canaltime fleet of timeshare boats. WPP have a management agreement with Canaltime to service and maintain their boats based at the marina. Four days a week from Wednesday to Saturday they clean, service and prepare a proportion of their Canaltime boats ready for new guests to use. Two years ago they had 11 boats, the following year 20 and this year 28 but the size of the marina means that further expansion here is unlikely.

The workforce too has expanded. When Neil took up the post of Marina Manager there were 9 or 10 people on the payroll whereas at present there are about 14 covering all aspects of the marina’s business. Some of these are part-time for the season but the increase in the number of Canaltime boats means that there will be more winter maintenance work to be done and thus the prospect of more jobs continuing throughout the year.

They have three full-time and two part-time engineers to look after the mechanical and electrical work on Canaltime and private boats. They do blacking and small paint jobs but not coach painting or sign-writing work. Pumpout, diesel, gas, chandlery, toilets, Elsan disposal and coal are available. While welcoming everyone to the marina, they do ask that customers first moor outside of the marina to check if these services are available before entering, particularly on the mornings of the Canaltime turnaround days, for safety and operational reasons. As a company they do their best to offer a friendly, reliable, courteous service.

The marina has a slipway for smaller craft and for larger craft the nearby BW dry dock is used for work such as blacking and other tasks that cannot be done in the water. Users of the private moorings have electricity and water available on their pontoons and have a washing machine and tumble dryer available for their use. With the general high demand for moorings and considering the location and setting of Blackwater Meadow Marina it should be no surprise that all the moorings are occupied and the number of people on the waiting list is only slightly less than the total capacity of the marina.