Pyrford Marina lies alongside the River Wey Navigation which stretches over 20 miles through the heart of Surrey. The marina is located in a tranquil and beautiful spot and is within 3 hours cruising of the Thames, which then allows access on to the Kennet & Avon Canal at Reading and the Grand Union Canal at Brentford. There is direct access from the Wey Navigation on to the Basingstoke Canal.

Road links to Pyrford Marina are superb, with the M25 and A3 being just five minutes away, hence making travel to London, the South Coast and Heathrow and Gatwick Airport easily accessible.

The marina has pontoon and bankside moorings, trailboat hardstanding storage, a dry dock and a slipway. Water berths are suitable for traditional narrowboats up to 70′ in length and a few water berths are allocated for smaller inland narrowbeam cruisers. 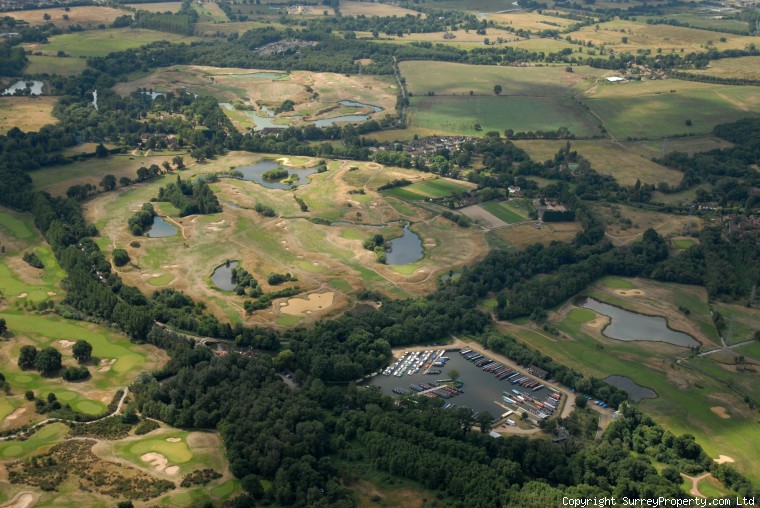 The Wey Navigation runs south from the Thames through the heart of Surrey’s stockbroker belt. About five miles down the river, just before Pyrford Lock, is Pyrford Basin. Although it is called a basin, suggesting that it may be a relic from the commercial heyday of the waterway, it was in fact excavated about twenty five years ago as a mooring place for pleasure craft.

The site has had various owners over the years and is now part of the Walton Marina group who acquired the basin about 10 years ago. Since that time the popularity of narrowboats on our rivers has spread to the Thames and the Wey, which together with the relentless demand for moorings, prompted the expansion of the basin some three years ago. This increased the mooring capacity from approximately 110 boats to 170 and allowed large parts of the water space to be fitted with pontoon moorings designed for longer craft.

Now there are only about 25 cruisers moored here and 85 to 90% of the mooring space is occupied by narrowboats. It is rare to find a marina with spaces available and Pyrford is no exception – it closed its waiting list when it reached the three year mark.

The Marina Manager is Steve Hughes who has been in post for about three years. Previously his career was in computers, he managed a team of 70 or 80 engineers across the whole of southern England. He has been a boater for about twenty odd years so when looking for a complete change of work he applied for the post of marina manager and is now enjoying the new challenges. Perhaps his greatest challenge is to run the marina with just one other member of staff.

On entering the marina by boat the first impression is of water and boats surrounded by trees creating a very pleasant setting. The water space between the boats is wide enough for the visiting boater to get in and out of the basin, and turn, without having to manoeuvre close to moored craft. The service pontoon allows boats to moor on both sides for the usual diesel, gas, water and pump out facilities. Beside the service pontoon the dry dock is available on a daily hire charge and can be used for DIY jobs or for work carried out by the marina. This includes a wide range of tasks from hull blacking to replating a boat.

Mark, the on-site engineer, performs a large variety of work including welding, electrical, plumbing and gas and other aspects of boat repair and maintenance. When I visited he had just finished installing a new engine. They will attend local breakdowns but do not provide a full callout service. A basic boat painting service can be provided and this is an area that Steve would like to enhance but finding a skilled boat painter in this area is difficult.

On one side of the basin is the building that provides the chandlery, office and home for Steve. Despite running the marina with such a small full time staff and the part-time attendance of the owner they still find time to hold an annual regatta, which took place a few days before my visit. This is mainly a social event for their moorers and includes music and a barbecue.

The Pyrford brand of new narrowboats, constructed and fitted-out by Liverpool Boats to a Pyrford specification, are also available here. They avoid getting into bespoke boat building but offer boats that leave buyers with a choice of layouts. Normally 6 to 8 of these boats are sold each year but in 2004 they sold approximately 13. This side of the business impacts on the management of the moorings as they have to reserve some mooring spaces that become available for people buying new boats. Used narrowboats and cruisers are available through their Brokerage service.