Cruising On The River Soar

Allan almost lives with his ex wife Toni. They cruise the waterways network together but on their own seperate boats Pengalanty & Snowdrop. Allan is a very experienced continuous cruiser but here’s what can happen if you cruise on a windy day. {{{0}}}

An Eventful Day in March 2012 written by Allan Cazaly.

It was on Friday, 30th March, that Antoinette and I departed from our overnight stop near Loughborough railway station.

We continued our cruise in the direction of the Trent & Mersey canal, on the Leicester Navigation of the Grand Union. This section is actually the river Soar and is already quite wide by the time it reaches Loughborough

We woke up to deteriorating weather conditions with increasing gusty winds but quite manageable. The two boats were breasted together (Tied side by side) for the next part of our journey, as Antoinette, (On Snowdrop), was not very well. This enabled her to rest, whilst I did the helmsman “Duty” steering the two boats, as one. 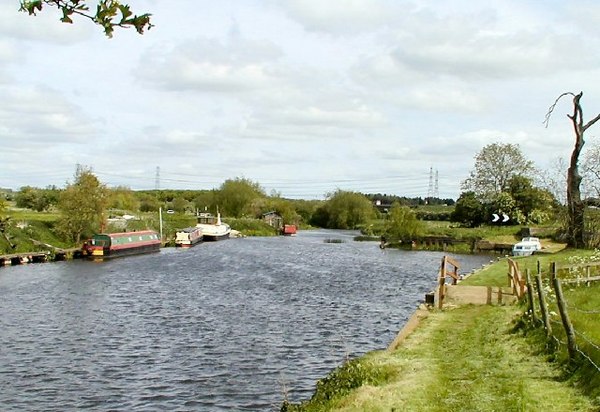 Cruising on the river Soar at Ratcliffe

I used Snowdrop for this as she has a larger engine and is a heavier and longer boat; best of all the 4 bladed propeller “Grabs” the water. Whilst Pengalanty, (With a custom made 3 bladed prop), can do the same job, it weighs under 16-tonnes against Snowdrop’s almost 21-tonnes and cruising is faster with Snowdrop and more responsive

All went well until we were passing the small village of Normanton-on-Soar and a left hand curve on the river. The area is exposed and we were subjected to fairly high cross winds, normally OK when keeping well to the middle of the river

From nowhere, without warning, we had a sudden squall and fierce crosswinds! Although the two boats were steered into the wind, almost pointing towards the bank and increasing engine revs, the boats were still drifting towards the Normanton bank, closer and closer to the trees. I had now put on full power and I was still getting closer to the trees!

By this time, I almost succeeded the fight against the severe wind before it subsided. Unfortunately, a large branch caught Pengalanty’s rotating toilet vent cowl, crushed it flat and removed it from the terminal point on the roof. It did not go into the water fortunately but remained on the roof. I retrieved it later

The same branch then picked up my new Rutland Wind Generator by the tail fin. The WG lifted off the roof, still on it’s hinged mounting pole. It went 180o to vertical and continued until it was parallel with the Tiller arm of the boat and it looked in a sorry state. The fin was bent and twisted and it seemed as though the WG unit had suffered severe damage (More on this later)

My concern was to take back control of the boats breasted together, now that the squall has subsided. This did not take long. I did not know at the time but my stainless flue chimney extension, (Used when moored), together with some other items had disappeared into the water, (From the roof), without trace but I didn’t discover this until later, about a mile further. This was the first opportunity with suitable moorings with rings set in concrete – quite important when cruising on a river! We stopped over here overnight

We moored just before Zouch Lock (55) on the River Soar. For readers that are not familiar with the English canal system, the river Soar is the upper reaches of the Grand Union (Leicester Line)

The Grand Union (Leicester branch) uses part of the river network here to connect to the River Trent, (The way to the North), the Erwash canal, (Leading through the Industrial area of Long-Eaton to Eastwood and also the way to the T&M canal; in effect, it is like a very large crossroads

Some of the signage is not clear and one can easily make a mistake, (Like we did – Sorry! I did). However it is easy here as the expanse of water enables one to complete a large circle and have another go at entering the mouth of the T&M, the direction we wanted. I actually held back to allow a cruiser to complete his way through, towards the way we had just come

I don’t want too many experiences of this nature – toooo expensive!