Not Everyone Enjoys Living On A Narrowboat

Is life really so bad Natasha?

I came across the article below yesterday. It was published recently in the online version of the Uxbridge Gazette. It’s a new blog by reluctant narrowboat liveaboard Natasha Gorbert-Hopkins. What do you think of her take on life on a narrowboat?

Life, warts and all, on a canal narrowboat in Uxbridge

LIFE on the canal in Uxbridge – a dream for some, definitely not the lifestyle choice of others – is brought to life in our new blog, The Narrow View, by boat dweller Natasha Gorbert-Hopkins.

SAY the word ‘boater’ and most people think of Rosie and Jim, old men with beards and folk festivals. If they think of anything at all, that is – living on a narrowboat (the long, narrow boats that ply the canals of Britain) is hardly the most common or widely known lifestyle choice.

As a 22 year old female, I’m not really your typical boat-dweller. I’m not really the most enthusiastic boater either: my parents decided to turn to the waterways when I was just a twinkle in their eyes, and – except for a three year stint at university – I’ve been more or less forced to live on them ever since.

Nevertheless, home for me has always been on the Grand Union Canal, in the stretch between Cowley Lock and Uxbridge Lock.

The towpaths, the trees, the neighbours are as familiar to me as I’m sure roads and estates and front gardens are to people who live in houses.

The canal was where my mum brought a chubby-faced baby version of me home from the hospital, the background to my childhood games, the waters that I stared gloomily into in fits of teenage angst.

Until the age of eight, I shared a boat with my parents; when my father moved out, he didn’t stray far, moving on to a narrowboat 10 minutes down the canal. At the age of 16, the fleet expanded further and I moved into my own boat, aptly named Freedom.

This was my beloved home for the next six years, until only a few months ago, when it was sold and I had to – dramatically, tearfully – move out, and begin sharing my father’s 62ft long, 6ft wide narrowboat.

My cries of: “Oh no, I have to live in a cupboard!” were probably heard reverberating down the canal for days afterwards. If I was 10, I would have been excited that I finally had something in common with Harry Potter, but unfortunately I’m 22 and can say for sure that my Hogwarts letter is not in the post.

Sharing such a small space with my dad, at an age when, let’s face it, I really should have moved out, has been challenging. Don’t get me wrong, there are positive aspects to living on a boat. There are also a whole host of negatives.

I will try to provide a balanced, realistic and insightful look into narrowboat life: I’ll try to cover some of my FAQs – How do you get water? Do you have electricity? – as well as some aspects that landlubbers (we don’t really call you that) might not have considered.

Next time: The difficulties of tall boyfriends, the complications of no electricity, attacks by swans, and the infamous – the dreaded – chemical toilets. 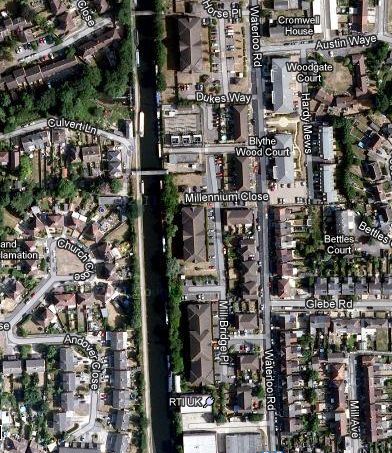 What do you think of that then? Has the article put you off living afloat? I certainly hope that it hasn’t.

Natasha has lived all of her life on a narrowboat. It’s all that she’s known. She appears to have been on a static mooring for all of her twenty-something years, and static, as far as I’m concerned, in one of the worst places in England to live on a narrowboat. The Grand Union canal runs through Uxbridge on the west side of Greater London. She lives on the stretch between Cowley Lock and Uxbridge lock. The caal there is in a densely populated area just a stone’s throw from the infamous M25.

One of the great advantages of living on a narrowboat is your ability to get away from the noise and polution of city life. Natasha lives within half a mile of one of the busiest roads in Europe with an estimated 196,000 vehicles using the section near Heathrow airport, which is very close to Uxbridge, every day. Uxbridge is also within the Greater London sprawl with its population of 8,000,000 hyper-active and highly stressed souls. Why on Earth would you choose to live on a narrowboat there?

I think that choice is probably the issue with Natasha. She couldn’t choose to live elsewhere when she was a child. She had to live with her parents, or at least with her mother, during her formative years. From a child’s point of view, I can imagine that there are few advantages to living on a narrowboat.

Space is of course an issue. Space is what teenagers crave, and there’s very little of it on a narrowboat. That’s why you see precious few families living on narrowboats. Ocasionally, very ocasionally, you will come across a couple with one or two very small children on a narrowboat, but the majority of liveaboards are single or couples.

Natasha enjoyed a spell on her own boat but now, at the age of twenty two, she’s moved onto her father’s narrowboat. You can almost feel her frustration as she writes her article. I can’t wait to see what she has in next week’s installment. She promises to try to “provide a balanced, realistic and insightful look into narrowboat life” She needs to try harder on the balanced bit as far as I’m concerned.