Narrowboat TV Aerial: The Perfect Choice For Your Boat

If you’ve read through the posts on this site, you’ll know by now that I don’t think much of television. In my opinion it’s a waste of reading time, it’s a waste of time that could otherwise be spent enjoying the beautiful countryside that surrounds me and it’s a waste of what little electricity it uses. It kills conversation and deadens the brain. It makes vegetables of all who submit to its malign influence.

You may be surprised to hear then that I’ve just joined the legions of couch potatoes up and down the land.

I’ve had a television for a year or so but, until very recently, I haven’t used it as one. It’s sole purpose was to play the occasional DVD when I felt the need. Unfortunately (or fortunately as I happen to think most of the time), these days it’s not just my needs I have to consider. There are two of us now. Four, if you include two spaniels.

Sally has been living on James with me for quite a while now. She’s not complained about the lack of television on the boat and because I’m male and quite dense sometimes, I didn’t once wonder what she might do to entertain herself during the endless hours each week when I’m working on the site.

The penny finally dropped and I realised that I was being unfair. I have a television, a Logic 22″ HD ready make-your-tea-in-the-moring affair

. All I needed was an aerial to go with it.

I don’t like traditional boat TV aerials. The reason I don’t like them is because they tend not to be boat TV aerials. It’s not unusual to see a full size house aerial strapped to the side of the boat and towering above all around it. We have one or two around the marina which haven’t been fixed to the boat terribly well. At this time of the year (late autumn) when there’s plenty of gusty wind about, it’s not unusual to see an escaped aerial dangling over the side of the boat.

We have televisions fitted in all the boats in the hire fleet at Calcutt. They have slightly more elegant aerials fixed to the roof. They can be quickly changed from receiving to travelling mode to prevent them from being ripped off the roof after making contact with any one of many low bridges around here. They’re still ugly.

At the beginning of the 2012 season one of the boats was fitted with a relatively cheap and very different looking aerial. It’s a small 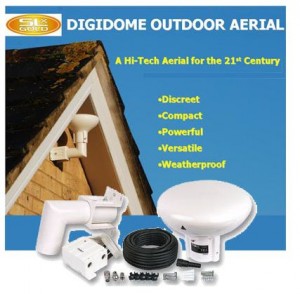 white plastic dome that sits on the roof. The aerial looks much better than the traditional scaffolding affair, doesn’t have to be bolted to the side of the boat every time you want to use it, and isn’t going to catch overhanging branches or low bridges as you cruise. It’s altogether a better bit of kit. It’s the Digidome SLX Gold.

I fitted one to James a fortnight ago. Actually, I didn’t. Russ, my boat’s guardian angel and all round narrowboat expert, fitted it for me. He told me it was a simple job, and for most normal males I suppose it was, but it involved cutting a but out of the bracket so the aerial would sit flat on the roof. Fitting the aerial, plus the modification took Russ all of fifteen minutes.

What a difference it’s made to life in our cosy little boat. The television now picks up over one hundred rubbish broadcasting channels. We have more mind numbing tedium on tap than we can ever hope to watch, and all with a crystal clear reception thanks to Digidome. I’m just off to watch a bit of Jeremy Kyle!