A quick background to start off.

We are Keith and Nicky from Jersey and liveaboard full time with our two dogs Binks and Benji. We’re fairly new to this having brought our first narrowboat in January 2012, moved aboard full-time in October 2012 and started to continiously cruise at the beginning of February 2013 so just a mere seven weeks into this part of our adventure. The loose plan is travel as much of the network as we can that we think will take us somewhere between five to eight years, not that we’re in any rush! And our home, it’s a 57′ cruiser stern called Badger Sett.

We’re even fresher to this blog lark and have copied our most recent post below and the previous dozen or so can be found at www.narrowboatboysontour.blogspot . You won’t of course find years of experience on this blog as we’re a pair of newbies, nor just a virtual cruise of the network, in fact there isn’t really a theme to it at all I suppose, it’s just a take on our daily life and some of what happens on our travels.

Anyway, enough of the opening chat as I’ve probably lost half of you to boredom already and don’t want to lose the other half before you get to my latest post:

Without getting technical, as I’ve only got a basic grasp on the whole solar power, batteries and electrics thingy, I thought I’d just do a quick update on our solar panels.

They were only fitted in December and as we were still based at the marina until the end of January we’ve only really had them to use from the beginning of February. Have to say though, they are the pups nuts.

As we tend to potter about i.e. not travel very far very quick, we only ran the engine for 27 hours in February, 25 of those being for cruising and 2 when we left the engine running as some gloomy spells had caused the batteries to run a little low. So our average running time in February was roughly one hour a day whereas we used to always run the engine for three hours a day being it cruising, running the engine whilst moored, or a combination of the two. As we’ve recently topped up, I’ve calculated the fuel cost for February to be £31.30 for the average running of one hour per day. Had we run it for three hours a day, then our fuel cost would have been an extra £70 that should equate to an annual saving of somewhere around £700 – £800 a year.

The system wasn’t necessarily cheap and add to that the cost of changing to LED lights throughout and installing some 12v charging points and it’ll take the best part of three years to achieve payback. As we’re just starting out on a long term plan though and the system is transferable to our next boat and then even to land at some point in the future, the saving over time will be considerable. I should also add though that we are conscious of our power usage and this does of course play a big part in our battery usage v charging requirements and therefore savings.

For those with some technical interest, our system is based around 3 x 195w Schott panels and a Tristar MPPT controller. If anyone should have any specific interest or questions let me know and I’ll see if my knowledge bank is up to an answer.

We’ve been moored on an embankment south of the Anderton lift for a couple of nights that offers some good countryside views and is nicely open to catch the sun from dawn to dusk that does of course help re the previous topic. 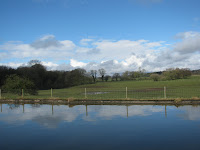 Although we do have some reservations about this particular mooring and in particular the sign that you’ll see pictured below. Anyone for a teddy bears picnic ? without of course feeding them. 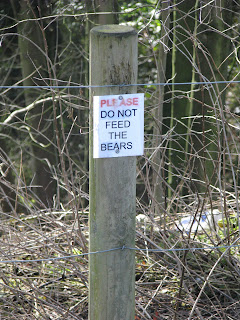 Marbury Country Park is adjacent to the canal and we’ve taken the opportunity of taking the boys for a few walks around there. Seems a very popular place, with a broad range of users – walkers, dog owners, parents with kids, cyclists and even some horses. On the towpath side of the canal is another larger area that borders onto the River Weaver with another mixture of wooded / open areas as well as some carvings in both wood and stone. 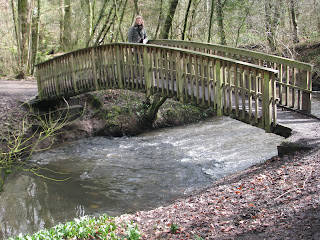 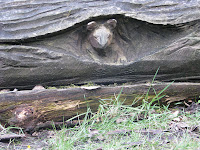 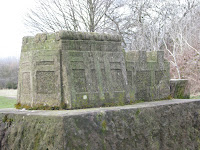 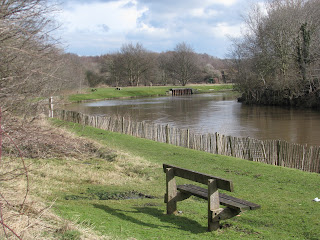 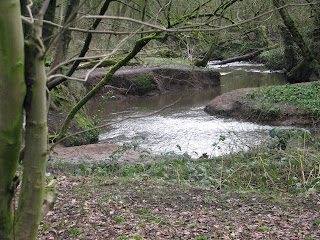 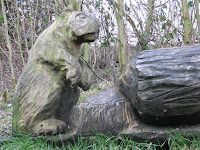 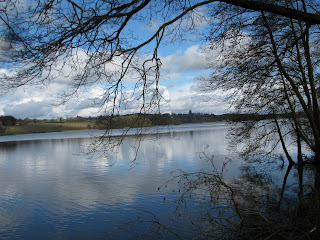 You will just be able to make our Marbury church that’s center(ish) in the above picture.

Those who read my previous post will remember the unfortunate medical condition that effects the indigenous species of Jersey, or more specifically the female brand, who are sentenced to a life with a dysfunctional gene and us chaps just have try and get them through it and support them as best we can. Well I’m sorry to say, it struck the Mrs again the other day. Came out of nowhere it did, no warning signs or anything, it just popped out. Let me explain. . . We’d taken the boys for a walk from where we’re moored to up past the Barnton Tunnel (572 yards long by the Nicholsons guide). As the towpath is on the opposite side to the canal entrance on the eastern side we couldn’t see any mention of when you could travel/timing restrictions of entry etc so walked over the top to the other side. The western side of the tunnel is better placed to look into it from the towpath and you could see through to the other side. It’s okay I said, we’ll be able to see if anyone is in the tunnel before we enter to which the reply came, wait for it, here it comes, ‘but you might not be able to see through from the other side’. This really ranks up there amongst some of her better moments, including the one where she said that a canal looked like it was going uphill and trust me, there wasn’t a lock in sight! Got to love her though and it’s just a small part of what makes her so special! 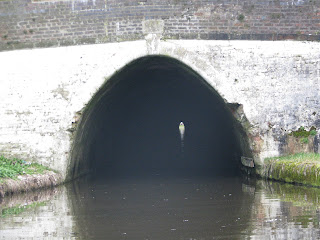 So as to not be put to shame by the Mrs and her culinary skills I decided that one of my must have items when we downsized to our boat was my pasta machine that I’d brought years ago and have used it more in the last few months than I have done since getting it. With time on our hands now though, we’d decided to try and do more from scratch than just buy in. With regards to the pasta, it isn’t necessarily cheaper and certainly isn’t easier than shop brought, but is worth the effort and what started out taking me about an hour and a half or more I’ve managed to get down to forty minutes or so from mixing the ingredients (flour and one egg, now even I can do that) through to the end product. Anyway, some pictures of me making Penna Pasta to prove it although as you can’t actually see it’s me, you’ll just have to trust me. 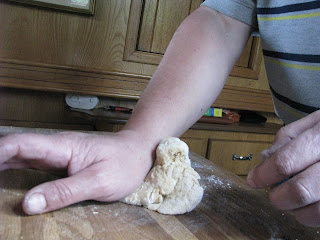 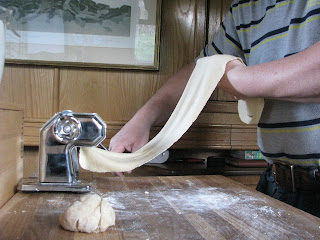 The cutting into squares stage . . . 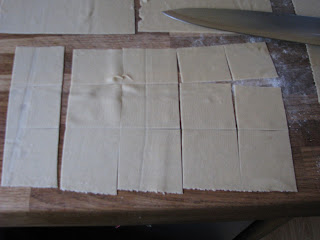 The shaping it stage . . . (I find rolling it around a chop stick the best way) 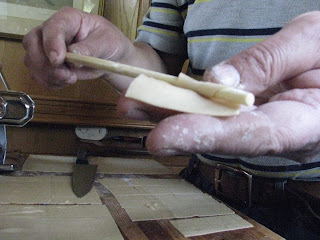 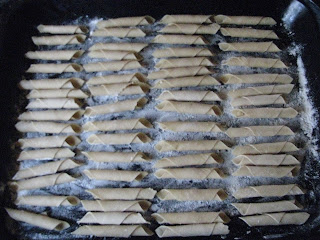 Well I suppose the end product stage would have actually been it served up in the bowl, but in my excitement and hunger, I forgot to take that photo. DOH!

And finally, it’s official, I appear to have a follower of my blog. Couple of guys went by on their narrowboat yesterday, think it was called Patricia. The Mrs was outside as they were passing and one of them asked her for ‘A Date’ so with a flick of her hair, a flutter of her eyelashes she said ‘pardon’, to which they said we want an ‘Update, an update of your blog’. Shattered she was, hero to zero in mere seconds. I feel that I should at least dedicate this post to them, but as don’t know their names I’ll just call them the Patricia Boys (just as well their boat wasn’t called Nancy I suppose).

And so in signing off,

Well that’s the latest post, the older ones can be found at www.narrowboatboysontour.blogspot