We’re still having problems with excess water in the engine room. With the bilge pump not working, we’re having to bail it out with a measuring jug and a bucket. Yesterday we removed eight bucketfulls before we set off and then a further four when we stopped for the night. I think I know where it’s coming from.

James’ engine in raw water cooled which means that water is drawn in from the canal to help cool the engine. The water passes through a mud trap before it reaches the engine. The mud trap has to be taken apart regularly so that the debris it’s collected can be emptied out. There’s a valve on the trap which has to be opened after the mud trap lid has been replaced to bleed any air from the trap. Yesterday, I noticed a trickle of water from the valve outlet pipe just before I turned the engine off. I suspect that, even though the valve is fully closed, water is escaping through it when the engine is running. I’ll point it out to one of the engineers when I get back to the marina. In the meantime, Sally and I will be keeping a close eye on the bilge water level and we’ll be bailing the excess out daily.

We reached the far point of our cruise yesterday. The Ashby canal terminus. Some purists will argue that we haven’t fully cruised the canal, but I’m not a purist and as far as I’m concerned, we’ve done it.

We cruised gently from our overnight mooring at Congerstone and past the village of Shackerstone. There are some beautiful private moorings on the offside between bridges 52 and 53. They overlook a meadow, almost a village green, complete with a small lake sheltered by weeping willows. Sally and I really liked the look of them but decided that the daily commute to Calcutt for work every day would be a bit too much.

The winding hole after bridge 53 marks the start of the SSSI designated Gopsall wood. The wood stretches for two miles on either side of the canal. It’s a beautiful but rather shallow cruise as I found to my dismay when I ran aground when moving off the main channel to allow an oncoming boat to pass. The beauty of the Ashby canal is that you don’t pass many moving boats so I only ran aground in the woods once.

As the wood peters out, there another mile of beautiful countryside before a sign for the Globe pub and the start of the 250m Snarestone tunnel. This was our first tunnel since Newbold on the outskirts of Rugby. I forgot to mention that when we navigated the Newbold tunnel I bounced off the wall a couple of times because of two schoolboy errors.

The boat’s headlight is fine for illuminating the section of tunnel in front of the boat but doesn’t help me to see the tunnel walls either side of the boat for the fifty feet section between the headlight and the back deck. The simple solution is to turn all of the boat’s internal lights on and make sure that the curtains are open. I forgot to ask Sally to turn the lights on.

The second and absolutely unforgivable mistake I made – please don’t think any less of me if I tell you – was to leave my sunglasses on. We were three quarters of the way through the tunnel when I complained to Sally that the boat’s headlight wasn’t very bright. “You’ve got something in common with the headlight then, haven’t you?” she said as she pulled my sunglasses off. It’s going to be a while before she’ll let me forget that one!

The Snarestone tunnel, with internal lights on and sunglasses off, was a breeze. Another half a mile, two more bridges and we reached then end of the Ashby, or as close to the end of the Ashby as I could be bothered travelling.

There’s a 70′ winding hole just before the water and Elsan point, and then a new swing bridge followed by a 100m stretch of canal which was opened three years ago. The purists will suggest that, if you want to claim that you have cruised to the end of the Ashby, you need to open the swing bridge, cruise to the end of the new section, reverse back  through the swing bridge, past the water and Elsan point and turn in the winding hole. 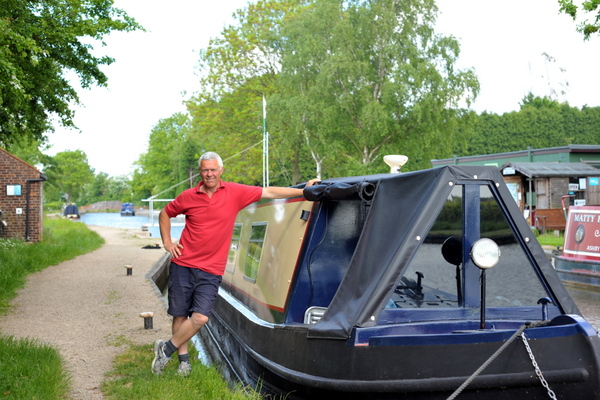 On a windy day and for the sake of 100m and probably 20 minutes faffing about, I just couldn’t be bothered.You can see the end of the canal in the photo above and the swing bridge just behind the boat.

The Elsan point, the brick building on the left hand side of the photo above, was the first BW facility we’ve used in the last week which has needed a key to unlock it. I had to spend 10 minutes searching for a BW key before I could empty our cassette even though I’m sure there are half a dozen on the boat.

Once we’d had a quick walk to the end and a quick browse through the books for sale in the unattended Ashby Canal Association hut, there wasn’t much else to do. We went back through the tunnel, stopped very quickly at the Globe for a toilet break before stopping for the night at yet another beautiful spot by the western edge of Gopsall wood.

We had the tranquil mooring to ourselves for about ten minutes before we were joined by two other boats. Three pairs of insular boaters made sure that there was sufficient space between moorings, set up camp chairs in the sun and quietly eat, drank and read until the sun went down.

Another day in heaven.

If you’re reading this post in the blog section of the forum, you may not be able to see some of the pictures or may only see them as thumbnails. Click on the link below to see the photo’s on the original blog post.