The Professor of Fish

Beside the wind-rippled greenish water of the old canal, at the center of Europe’s largest city, a Grey Heron has followed the canal in from the Middlesex countryside sixteen miles away.  Last night, from the stern of our boat in Paddington Basin, I watched this quiet professor of fish hunt in the glom of late evening.

Overall, this is a delicate and elegant bird —  looking as if it were clothed in a trim, close fitting mourning coat. However, up close, one can see a telltale wisp of black feathers dropping down along the back of its head creating the absurd impression of an eccentric professor or vain maestro with one last pathetic length of black hair swept back and down.

The Grey Heron is a shallow-water fisher, tall with long yellow-orange legs, a compact oval grey-blue body and, of course, a long powerful neck and extended beak that resembles a forked spear when open. With a head no wider than its neck — presumably for a swifter strike into the water —  the unsettling effect of a headless bird is created when it turns to look directly at me in the almost night.

On many evenings the  heron come to hunt at London’s Paddington Basin, which is not round, as its name night suggest, but in reality a rectangular channel angling down from Little Venice –  the termination of  the Paddington Arm of the Grand Union Canal. Narrowboats and wide-beams line the edges of the basin, followed by a modern cobbled walkway and then sheer steel and glass commercial and residential buildings ring the water; reflected in it day and night.

Successfully camouflaged amid the blue glass and the darker blue of the day’s last sky shimmering in water, the heron finds its place. Almost beside our boat, between two mooring pontoons,  is a walkway and steel pedestrian bridge with an unseen cement support beam a few inches below the water’s surface. Stalking this invisible path, the heron takes up its work – very, very  slowly pacing the beam  — its entire body a poised expression of focused observation and meticulous stealth. 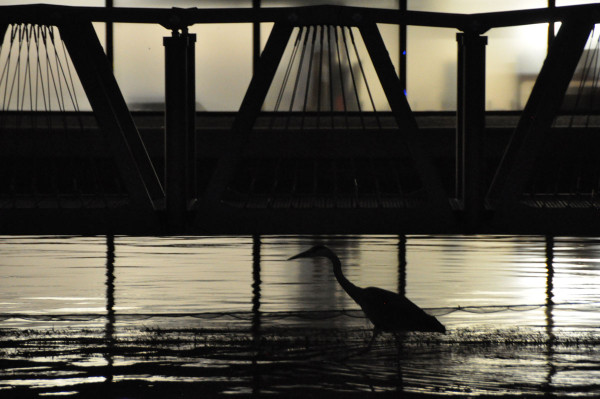 Often not moving at all for a minute or two, the bird searches  back and forth with a halting but impeccable grace;  step….step….step….wait!  Step…step…wait…step… lifting each individual leg and placing it down with almost unbearable care and slowness.  Then a pause with the neck coiled back in a Swan-like “S”. Then,  SNICK —  the beak, in and out of the water in less than an instant, followed by something toothsome descending a long feathered gullet.

Meanwhile several people have passed over the metal bridge, their steps clearly  tapping or clumping along, faces glowing in the light of their Screens, oblivious to the bird — absorbed into the rapt  pleasure of his hunt only a few feet away.

Most of the kills are swift and ordinary,  but moments of great drama come when the coup de grace is accomplished as the lanky bird sets its feet a little wider and leans out several inches off center to make a “catch” —  every bit like a baseball short-stop, fearlessly off balance,  hauling in a fast ground-level ball in the gap between first and second.

Finally, as the tension begins to ease and the last of the evening leaks away into night,  the heron is discovered and briefly attacked by a flashing white seagull —  threatened by a competitor’s superior skills.

The basin, until now a study in distant muted city-sounds, erupts into a grating verbal war of “kee” kee” kee” from the swooping gull — with each dive met by a  resentful hissing “Geraawk! Geraawkkk!” from the now almost invisible heron who soon peevishly  takes flight – to become a new wonderful airborne version of itself –  legs perfectly trailing, straight neck, sleek body and wings silhouetted against the sky, turning, rising again, turning again, lifted into darkness on extended wings.