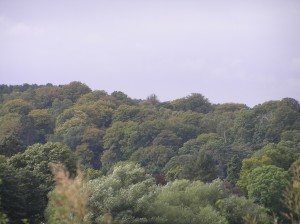 Hey what happended overnight? It’s about 10 degrees cooler than yesterday and it’s a good bit breezier too. This is going to be a little bit of a different day to last few but never mind. There seems to be a few folks up and about and they seem to be in a hurry too. Thanks to Pearley for the courtesy article which explains about tieing up properly. The forward rope out front so it pulls forward and the stern rope out back so it pulls you backwards really does make a difference when people go past too fast. I’m not being thrown about as much.

Today I’ve had to put on two t/shirts and a fleece and my hat now the temperature has gone down, I have still got shorts on but I wear shorts virtually all year round. Ok so some of us are a little different this allows you normal people to feel a little superiorl.

Off down to Colwich lock and having got in the lock met by a nice lady coming the other way and shared a really nice conversation. 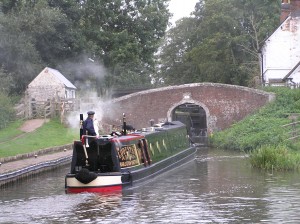 She was a lovely lady to start the day off and on leaving the lock her husband a pleasant chap too with one of those boats with the engine Paul was talking about a while back where they fire about once a minute. Makes my Kubota engine sound like a two stroke. Nice boat too, see picture.

Through Colwich again which is a picturesque type of place then back out into open country side. Now I’m going through the same places that I came through on the way up so I shall have to think of new things to say and makes sure I don’t use the same photos or you’ll rumble me. It is a bit breezy and it’s pushing the boat about a little as well making me keep the collar on my fleece turned up and my hat pulled well down but it’s dry and the sun is trying to shine. I’m not encountering many boats so I’m just plodding along at 3 mph ish. 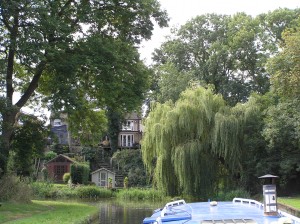 I’m only heading for Fradley which should be about 11 miles and only 3 locks so no rush. Bridge 68 is the turning point where the open country changes to a few trees and then turns towards Rugely and the aqueduct over the Trent that says you’re there.

the first part is nice houses and gardens that slowly sort of turn a little less nice then becomes the town centre where there is plenty of mooring but today most of it is taken which makes it quite narrow and would have made life interesting if I’d have met anyone coming the other way but I didn’t. Rugeley merges with Mossley and a 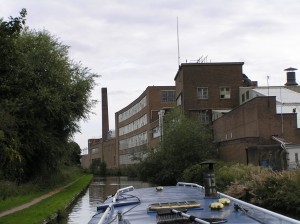 working factory then down to the Ash Tree pub and Ash Tree boat club moorings, Hawksyard Priory golf club and moorings then the Armitage tunnel, with no roof. 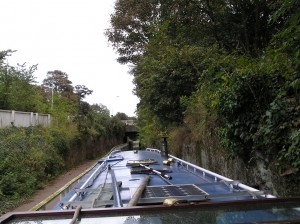 Coming out the other end you fall upon the Plum Pudding pub with moorings and lots of tables outside. I must try it next time I’m up this way as it does look like a nice pub. Then the alotments. Now being of a sound mind and steeped in logic and a Physics O level I understand totaly about water finding it’s own level and Archimedes and all that jazz but from Hawksyard priory I have had the feeling that i’m going uphill and I’m enclosing a photo to back up my theory. 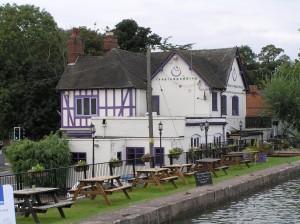 Look at the boat and the bank is nearer the gunwhales at the back than the front indicating that is indeed on an incline. Your honour I rest my case. 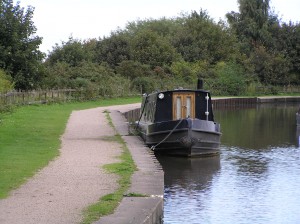 the canal, again only a few boats compared to the number of properties. A left turn, under a bridge and back out amongs the fields and trees. A mile of lovely scenery and just before Kings Bromley Wharf I pass a couple hosing down the frontage where it looks like they’ve been concreting, they are stood next to a concrete mixer, and we pass pleasantries and they look as though they’ve earned their supper. Kings Bromley Wharf with a big sign up saying “No Winging”. Is it me but why are people so mean and mardy when there is ample room to wind. On the roads you see signs no turning. What mean people are they that don’t want to allow someone to use their space when as far as I can see it will do no harm what so ever. Is it just me? 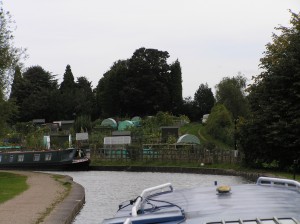 Down past Kings Bromley Marina, a seperate enterprise, and onto what is at the moment one of my favourite stretches of canal. Lovely tree lined canal. Lots of Oaks and Silver Birch lining the banks and then a slight left turn and a long straight with Ravenshaw wood on one side and open fields on the other. This was where I overnighted on the way up, a lovely place. Woodend lock followed by a sharp left and the top lock at Fradley junction is in the distance.

A couple of locks and I’m moored up in the middle section. Nip to the loo and check out the showers. These are BW and are in very good order, no problems at all. After a shower it’s up to the Swan pub for a couple of pints and I chose to have the lasagne which came with chips, side salad, garlic bread and I had a side order of onion rings. The lasagne was very nice, probably microwaved, the onion rings were possibly the best I’ve had in a pub anywhere but the chips were frozen and I do love chips where some one has peeled a real potato the same day as they are fried, but that’s what you get in some places, they were ok. I didn’t leave any so they couldn’t have been too bad. 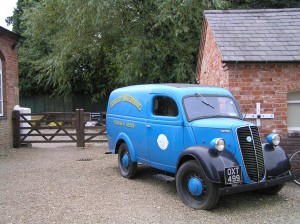 Bar staff and a lady I took to be the Landlady were good and the customers were friendly. I felt welcomed and at home within a few minutes. I had the Thatchers Gold cider which is nice and they had a good selection of real ales on too. The menu isn’t extensive but enough choice and with vegetarian options. A few people said the Sunday dinners here are wonderful and it get’s packed apparently. 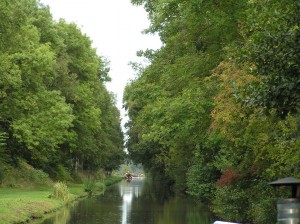 A couple of pints and a meal. Watched some good sized carp taking bits off the top of the water then back home to write my blog. They have a folk night here on Thursdays but I’m tiring so I will miss it tonight and have to call round by car another time and join them. I lit my first fire of the week tonight as it was dropping a little cooler as I came back from the Swan so I am now well warm and cosy.

Falling asleep over the computer so it’s time for bed.

Night folks and tomorrow we can do some moor.