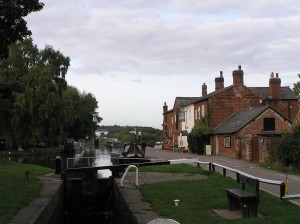 What a beautiful morning to wake up to. Came as a bit of a surprise as I was expectin the same as yesterday. Took my rubbish to the bins and used their toilets then cup of coffee and mop out the engine and bay and decided to fill my grease gun and tighten the stern gland while I was down there and it was about 11 gone when I set off. Had to wait for the first lock but then help on the second lock  and we are off. 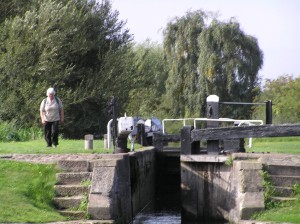 Down to Common Lock where a lady who had walked it to the butchers in Alrewas was coming up with her dog and we got chatting, she was one of those really nice people who brighten you’re day up and make you feel better just for bumping into them. She volunteered to shut the gates for me so another job saved. She looks a bit blured on the photo but she  wasn’t quite as blurred as that in person.

Then Bagnall lock as you get to Alrewas and I was also going to call on the butcher there as they are supposed to be veeery goooood. Someone coming out of the lock as I got there so straight in and then moored up a few yards after coming out to wander down the high st and try to find the butcher. I found the PO first which was good as I had a couple of items to mail that I’d sold on ebay and she told me the butchers was just a few yards after the pub and not to get side tracked. 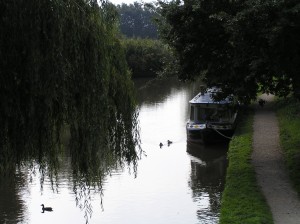 A very good butchers it appears to be. I picked up a lettuce and some toms on the veg and some smoked bacon and a home made pork pie but checked out what else they’d got. Good assortment of home made pies, scotch eggs, cooked meats and a few dishes with like stir fries in them where the meat and spices and bits were already in. Their meat really did look the business. I can’t stock up as I don’t have a freezer but it’s close enough for me to go by car from Mercia.

I thought I’d better stop by the George and Dragon in the interest of information for my blog so I had just a half of Burton bitter. The pub is old and lots of wood with a friendly feel to it. They serve meals there and the smell was very tempting. It was about 1 o’clock when I was there and it was quite busy. A good selection of hand pull beers and the Burton bitter I had was very nice. I shall be calling again when looking for a place to eat and will overnight at Alrewas next time I’m out and about. Moor at bridge 48 and just walk into the centre of town. The road is very quiet and this was Friday but the post office is there then the pub and the butcher and there could be a coop a little further down the street too. Oh and there is a chemist as well.

Off we set again and it’s a nice little village, you get the sense that you need a bit in the bank to live here, and down to the lock before the river section and a boat coming up. A nice couple with their grandkids I think and he stayed behind and did the gates for me as I was on my own. All the friendly people seem to be out today. 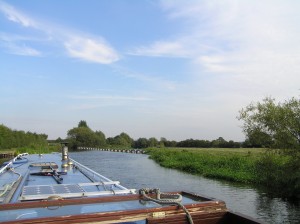 The river section is were the canal joins the river Trent for about a hundred yards and then turns of at the weir down into Wychnor. You can get stranded when the Trent is in flood as it can be closed to navigation. There is a notice board at Fradley junction saying whether the river section is open or not. The water is much clearer through Wychnor as it’s river water not canal water and after the first lock it is still nice and clear. It’s lovely being able to look and see the weeds under the water bending with the flow, the slide as the shallow bottom at the sides slides down as it comes out to the middle. Plenty of tall reedy grass at the sides aroung Wychnor. I like it up there and more so as it moves furhter away from the A38.

Wychnor Bridges lock and someone coming through again. My timing is good today or someones looking after me. This time they were a couple who had bought the boat yesterday. I passed some tips on as not to rush and not necessarily to tie up in a single lock and not to worry if they hit something so long as they hit it slowly. 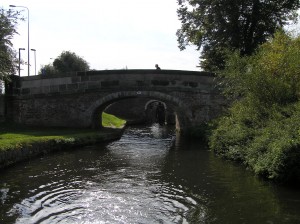 I’m not sure how much they took in. After I was in the lock and ready to open the paddle to empty it I had another lovely lady come to help me as she and her husband were coming up so a lot of work saved again. 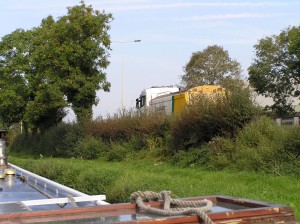 Here is were the canal meets the A38 and runs side by side for a couple of miles. It’s still lovely and picturesque but very noisy as the traffic speeds past about 15yds away. Not much further to go when you get to Barton Turns lock and a cruiser coming out as I get there so just hovered and went in. As I was leaving the lock another nice man asked if I wanted the gates shutting. I replied yes please and asked if he was coming down and he was just walking past and offered. If only the world was like this all the time. I shall wake up soon and it will all have been a dream.

Tatenhill lock and no one was coming through, no one to help me. What is the world coming to? I shall have to complain to C&RT or someone. It is a lovely looking lock and yet over the hedge is a huge factory yard so it’s on the edge of an industrial estate yet feels, apart from the distant road noise, as though you’re in the middle of nowher. 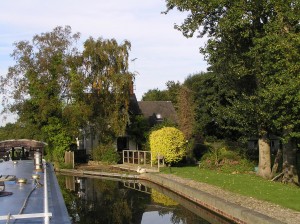 Now I want to find a mooring and there a few boats moored alongside Branston water park nature reserve and I find a piece of empty armco just about the right size to fit Forty Winks in so I reverse her in and tie her up and settled for the night. My last night of freedom. There is a pub just down the towpath which does pizza and pasta but I’ve already got my faggots in the fridge so faggots, chopped toms with cinamon and bisto, mushrooms and onions for tea it is.

I have now eaten and returned to work on the blog. It was just what the doctor ordered well probably not the faggots as they probably have a lot of fat and preservatives in but they were nice. I’ve just looked out the side hatch and it feels like a summers eveing. Lights down by the pub, just the faintest feel of a breeze, the water flat calm. The night is dark and a few clouds but no moon yet. After a week out and a day like this I could almost think about living on a narrowboat. I shall have to give it some thought. 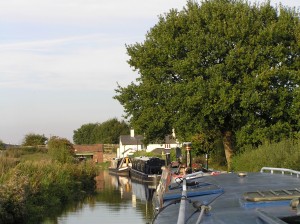 This is tonight’s mooring with the sound of the A38 droning noticeably but not too disturbingly. The Trent and Mersey canal from Shardlow upto Willington follows the A50 then the A38 takes over till you get to Wychnor Bridges where they part company, thankfully. But canals were built to carry freight and they follow roads and train lines so we have to grin and bear the times when they are side by side or closer than we would like.

Oh a passing comment on the tradition of partaking of a glass after mooring up once the travelling day has been completed. No it doesn’t matter what time it is. Today I had a glass of Talisker whisky which is distilled on the Isle of Skye and is the finest tasting whisky that I have pertaken of, well so far but there may be better, it danced on my tongue while my taste buds sang halleluiah.