Again I’m impressed by the progress made since my last visit just a few weeks ago, particularly considering the festive period fell within that time.

The most obvious difference from the outside is that all ten of the curved-top holes for the windows have been cut out, as have the two round holes for the large portholes.  The side-hatch doors (later to be glazed) have been fitted. 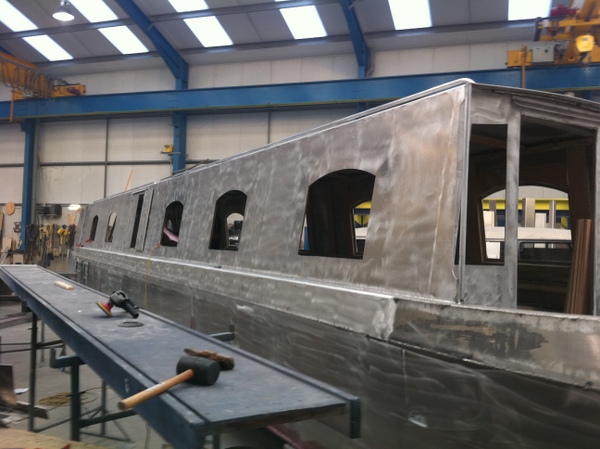 As I step onto the bow I realise how much work has been done in this area too. 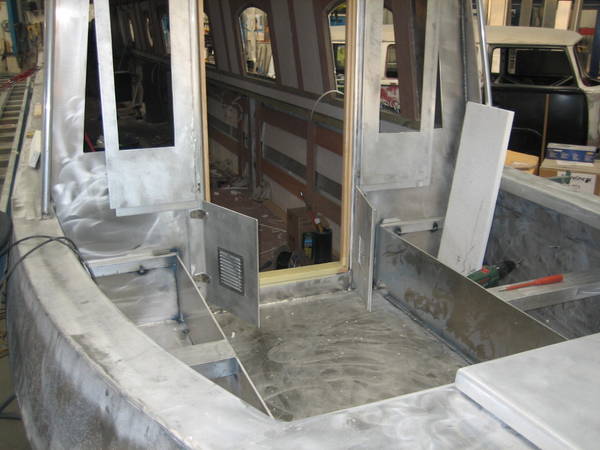 The deck is in, and so too are the lockers. The shapes of the bulkhead windows (on either side of the bow doors) have been cut out, and the bow-doors installed.  As discussed in the planning stage, “stable-doors” had been constructed for me.  The lower sections will be useful when my grand-daughter reaches that dangerous crawling stage, and the upper sections can be opened right back against the bulk-head  They can be leant back against, whilst sitting on top of those lockers.  Just what I ordered.

As I step through the bow door, I see that, even with the roof now on the boat, and still being under the roof of the factory, the boat is impressively light inside. 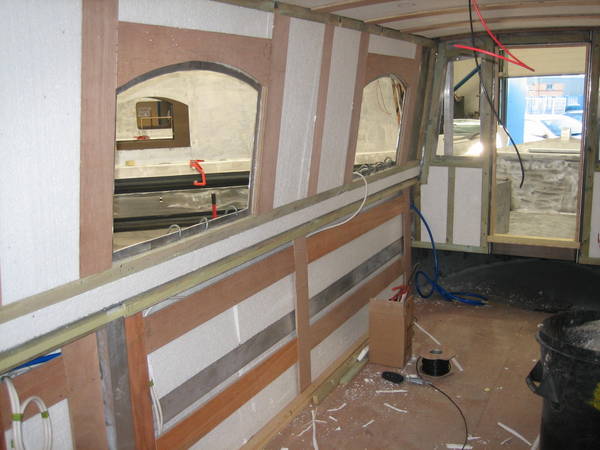 The internal wooden surrounds to all the windows & portholes are fitted neatly, (the final panelling and internal polished wooden window frames will be installed later) and the foam insulation sheets are in place throughout the inside of the boat.

The wires that run from stern to bow (such as those for the bow-thruster) have already been safely installed within that aluminium box section visible half-way down the side of the boat.  There’s no chance of a stray screw piercing them.

The pipes that carry cold & hot water from the bow water tank and from the calorifier respectively are in place.  Sea Otter use flexible plastic pipe, for most purposes, not HEP. 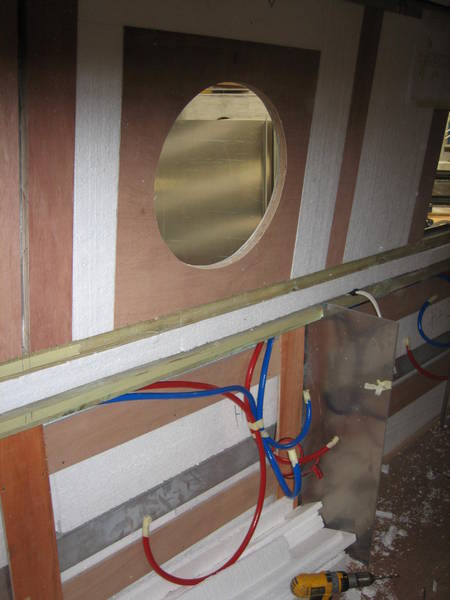 In the photograph above of the porthole and pipe-work in what is to be the bathroom, you’ll see that the newly cut ends of all the water pipes have been covered with masking tape.  This is to avoid small pieces of insulation (and there’s plenty of those about ! ) getting trapped in the pipes, which would cause plumbing problems later.  They’ve learnt that from a past experience !

I’ve mentioned trace-heating.  It’s a wire that warms up as 240v is passed through it.  It is used in conjunction with a thermostat, and it keeps the water-pipes warm in freezing conditions.  I had ordered that from my supplier previously, and I have brought it with me.  I did intend fitting it myself, but they weren’t quite ready for that, so it was decided that John would fit it the following day.  I leave them to it, and I’m due back in 5 days time.

John the electrician has been very busy !

Wires are hanging down and sticking out from everywhere !  Apparently I’ve specified so many 240v sockets there’s got to be three ring-mains. 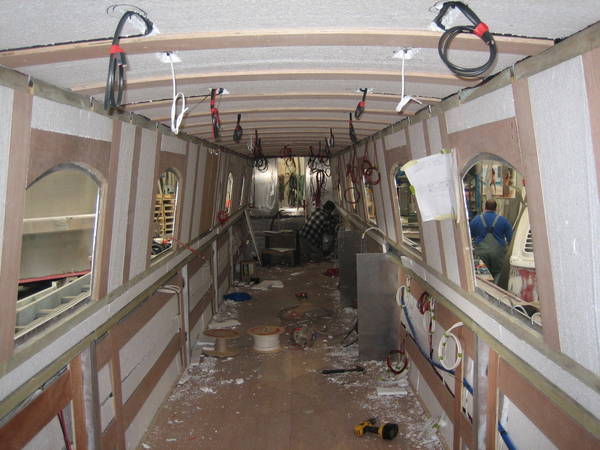 More of the additional wiring is being fitted by electrician John during my visit. 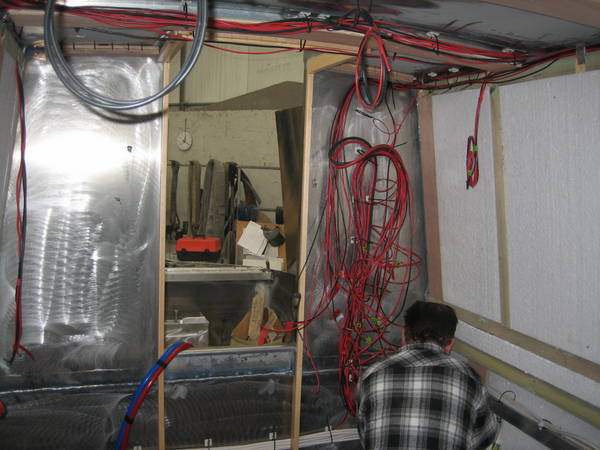 The following photograph shows the black heat-trace wire attached to the pipes in what will be the kitchen.  In other areas more “spare” heat-trace wire has been left, for example, to wrap around the shower pump at a later stage. 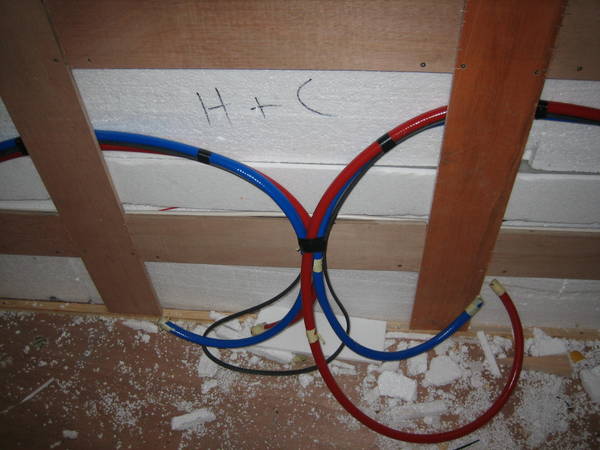 A few other things were discussed that day.

I’m a bit fussy when it comes to diesel filler caps.  I obviously want a lockable one to help protect the valuable contents of my tank from thieves, but I also want to reduce the chances of water ingress through it.  (We read more & more about problems caused by diesel bug caused by water in the tank.)  I’ve seen some poor examples of lockable fuel filler caps sold for boats, some of which come complete with a clear warning that they aren’t waterproof ( by offering the advice that an additional water-trap should be fitted in the fuel-line after fitting ! )   I have a few ideas of my own, but I’m shown the type that Sea Otter Boats normally fit, and it ticks all the boxes.  The external top cover has no hole in it, and is domed so that water will run off, and completely covers the screw-holes with which the whole assembly is fitted.  It has two good seals.  The cap is positioned under a rod which fits through holes in the normal upturns around the fuel filler, and locked in position with a standard but good quality padlock.  That will do nicely.

As usual I leave very content with the progress and the discussions we’ve had, and will return in 8 days.

In between visits I choose my multi-fuel stove from the range on display at Midland Chandlers, Preston Brook Branch.  It is a Morso Squrrel 1410, which is the more “traditional” of the range.  It is also the cheapest of the Morso stoves that I see.  It has the lowest heat output too.  (That suits me because from my experiences of man sharing boat with stove on well-insulated boat, the biggest problem is man overheating.)  It is NOT one of the new “cleanheat” range.  (I’m told that the flue in a narrowboat cannot be long enough for the “cleanheat” system to work efficiently.)  It hasn’t got the biggest front glass, or a lattice door, so it will be easier to keep the glass clean.  I’m told that it is one of the most easily controlled (because of the two variable air-vents regulators) and so a low combustion rate is easier to maintain through the night.    But, best of all it’s got a squirrel on both sides (they don’t all have) and I like squirrels.

As usual the staff at my Midland Chandlers branch are very helpful. They put a “fiiting kit” together for me, including flue, roof collar, chimney, rain-hat, bolts, sealant, lagging etc.  And two “lockgate fixing feet”.  Apparently these replace the back two feet that come with the stove.  These  have pre-drilled holes enabling the stove to be bolted down.  The stove, once secured, then complies with one of the latest boat safety rules.  I even treat myself to a companion set for when I’m on the boat alone.

I pay cash for everything, but Otter Boats previously negotiated the trade prices that I pay, so I’m happily acting as a courier and will deliver the stove to Sea Otter Boats at Chesterfield the very next day.

My trusty Mazda 323 knows it’s own way to Staveley (Chesterfield) now, and has even worked out a few short cuts.

Today we discuss bilge access.  They tell me that they provide this as standard on all their boats.  They show me a little flap near the stern steps in another boat being built, which provides access to the lowest point of the bilge, where leaking water from anywhere inside the boat will collect.  I should have known they’d have thought of that.  I intend dropping a simple battery operated water detector probe into this space later, so I’ll receive a very loud audible warning if it gets wet down there.  I’ve used these water detectors before (and I sell them to RCR) and I think everyone should have at least one !  They’re a very affordable early warning device.

I know a bit about fridges, as in an earlier life I wholesaled spare parts for them.  I know the working bits produce heat, and normally that heat is trapped behind the fridge because there’s usually very little space behind it for the heat to escape.  So gradually the space behind the fridge gets warmer and warmer, and the fridge has to work harder and harder, and use more and more electricity (be it 12v or 240v), to cools itself inside.

The way to increase the efficiency of an overheated and overworked fridge is to provide the back of it with some ventilation.  I ask Anthony to make a note to drill me some holes through the floor and into the bilge, behind where the fridge will be.  And I ask for some more holes to be drilled through the wood at the side of the fridge. This will provide some useful ventilation.  But the ventilation can be improved considerably by the fitting a small fan to draw air into (or out of) the space behind the fridge, thus creating a draught. (A computer fan is ideal and can be bought cheaply from Maplin or on Ebay.)  Many 12v fridges have two very useful contacts on the compressor, to which the wires from the fan can be connected.  Wired this way the fan only operates when the compressor is working, thus saving valuable battery power.

A by-product is that the draught thus created can also help to keep the bilge aired.

I’ll likely pop another of those water-detectors down one of the bilge access points behind the fridge at a later time. [Eventually I fit 11 water detectors to my boat, but not soon enough !]

Our discussions are over for another day and I see my boat. 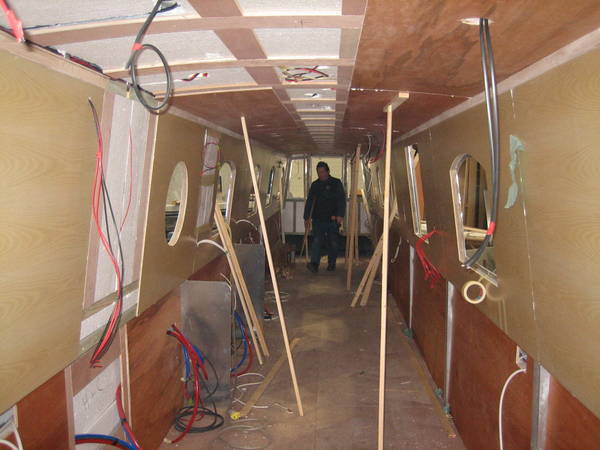 Starting from the roof there WILL be a central area of “quality A” panelling, which hasn’t been fitted yet.  On either side of that, just fitted and still being supported, we have an area of brown “quality B” panelling.  During my last visit I watched as all these browner panels were being sprayed in the paint-shop.  They will all eventually be covered with a cream vinyl headlining, and it is through this that the lights are fitted.   The foam roof insulation at the top front left is just about to be covered by another panel of “quality B”.

Moving vertically down the side of the boat there is a layer of “quality A” panelling surrounding the windows and portholes.  This has a very nice light ash veneer, and has been previously sprayed with varnish to a very shiny finish.  Every panel has been chosen so that the grain matches that of its neighbour.

Below that we have the gunnels, and below that a layer of “quality B” panelling.  If you have read all my progress reports, you’ll know I’m going back in time and having carpet fitted up to the gunnels.  It would therefore be somewhat of a waste to use ”quality A” panelling when its going to be covered in carpet.  Sea Otter Boats are not going to charge me for the extra carpet they’ll need, because they save money by fitting the cheaper “quality B” panelling in this area.  Another mutually beneficial arrangement.

You’ll see two aluminium plates sticking out from the left hand (portside) wall.  These represent the bulkheads on either side of the kitchen.  Towards the camera from the nearest aluminium plate, you’ll see the water-pipes for the wash-basin, and you’ll observe the black “heat-trace” wire coiled up amongst them.  The reason there’s so much “spare” there is because it will need to stretch to the shower pump, and coil around it, to protect the contents from freezing in the winter.  Closer still to the camera are the water pipes for the shower.

I leave for home after another satisfying visit, and will return in 6 days.