Another week has flown by and I visit Sea Otter Boats again.  The engine has just been unpacked from its crate. 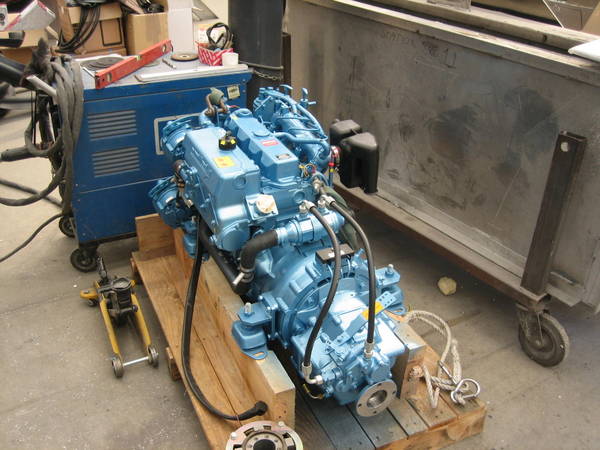 I suspect that I pushed the amiable repartee which had developed between us over the last few months to a perilous new level when I told Paul  (in a very serious manner and with a very straight face) “I’m sure I ordered a red one”.

The big round bit of the engine between the two nearest mounting brackets, and with a black box on top, is the 240V “intercalated generator”, designed to produce 4.5KW, when the engine is running. 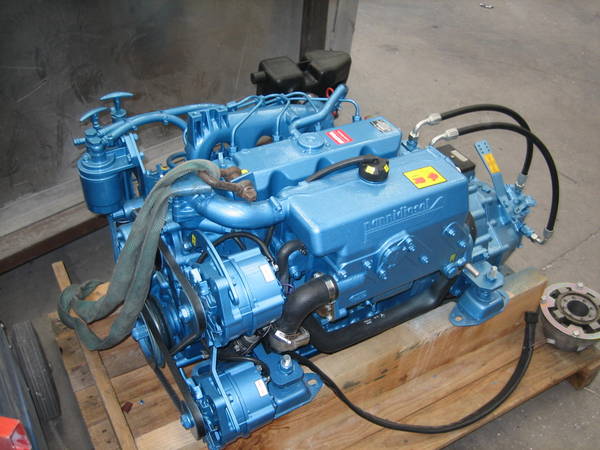 Those two mushroom-shaped handles at the top left of the photograph are for the oil removal pumps, one for the engine oil, and one for the gearbox oil, the latter being an optional extra.

The circular thing at bottom right is a standard Sea Otter fitment, similar to a “Python Drive”.  I’m told it will take up a certain amount of misalignment between engine and drive-shaft, and a rubbery bit within reduces vibration.

There’s a funny thing about this engine.  You would think, looking at the photographs of it that the two mounting brackets, on the SAME SIDE of the engine, are in line with one another.   But they aren’t, despite the fact that they ARE shown to be in line on the diagram that came with the engine.  The distance between the rearmost pair (nearest the drive shaft) is several mm’s greater than the distance between the two front ones (nearest the alternators).

This may not seem important……until engine fitting time, when the bit of the engine block, nearest to the rear mounts, catches on the inside of the aluminium box-section engine bearers, and doesn’t allow the rear mounts to sit squarely on the bearers.  Emergency modifications needed to be carried out, hence the two cut-outs on the bearers shown in the photograph of the engine bay below. 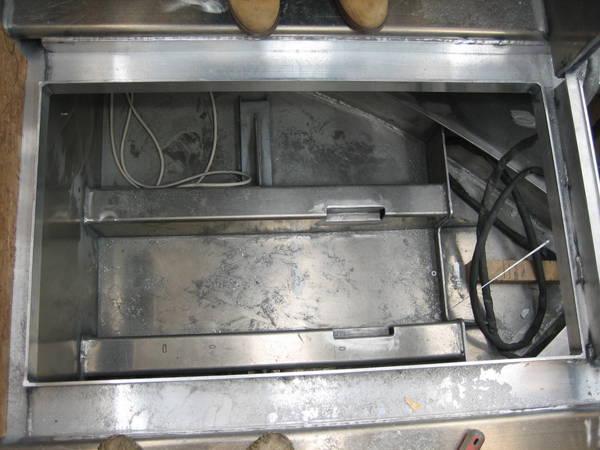 A framework for the airing cupboard has been constructed, and a chrome radiator is fitted to the right of the calorifier.  That will be one warm airing cupboard. 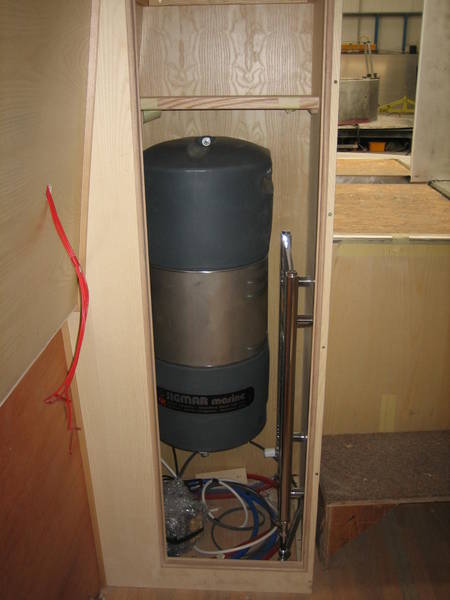 A full height “wardrobe-type” door will be fitted later.

This will be difficult to photograph (and also to extract!) once the kitchen work-surface is fitted.  It is a neat sliding unit on the left-hand-side of the top shelf, constructed by Nigel around a “B & Q” cutlery tray.  (Ignore the coiled up gas-pipe!)  There is a similar one, but smaller, on the right-hand-side of the same shelf.  The utilisation of both means that there is no inaccessible place on that top shelf. 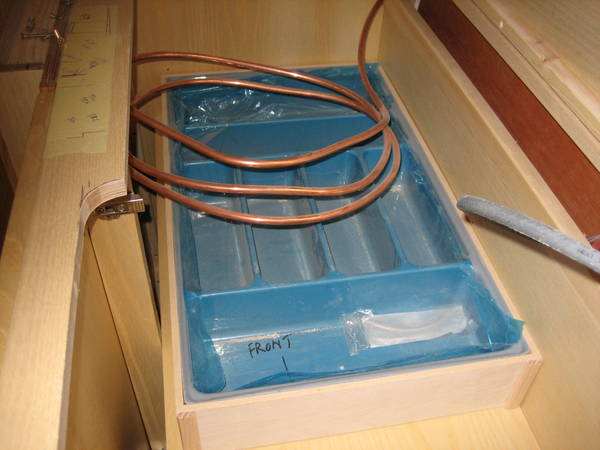 This is a very neat cutlery drawer beautifully constructed by Nigel and fitted BEHIND the right-hand-side kitchen cupboard door.

A neatly fitted towel-rail in the bathroom. 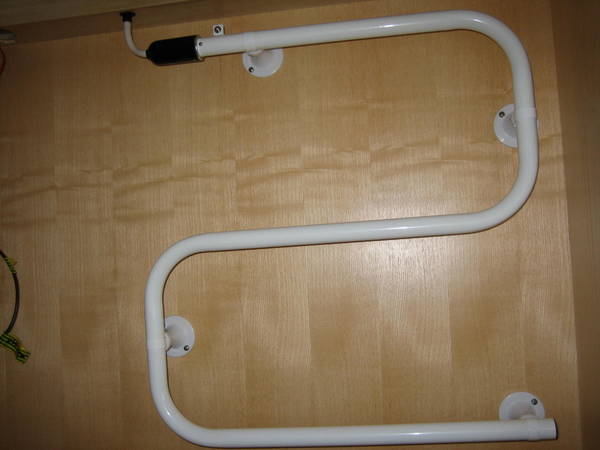 And that’s just to comply with new regulations !

My reader may remember that I bought my Morso Squirrel HS-022 stove in February 2011, along with the fitting kit, from Midland Chandlers, Preston Brook branch.  But, subsequently, in March 2011, a new British Standard came into effect pertaining to the fitting of solid fuel stoves in canal boats (BS 8511:2010). This means the fitting kit I bought is not now suitable.  In fact, neither should I even be locating my new stove where planned.  Probably the most common place for a stove on a narrowboat, between the bow steps and the hull, is NOT now recommended under the new code of practice !

Well, there’s nothing I can do about that at this stage in the building of the boat.  But we’ll do our best to follow the other guide-lines regarding the fitting.  The biggest change as far as I can see is that the roof collar and chimney must be double-skinned, additionally the roof-collar must be insulated, and the chimney must be 2 feet tall when moored and in use.

So I ring Midland Chandlers to ask if they’ll take the originally-purchased (and unused) fitting kit back, credit me for it all, and supply me with a new one which complies with the regulations.   Well……up ‘till now they’ve always been very helpful…..and …..today…… was no exception !  “Certainly”, they said.

There is good news too.  This is a “genuine” kit is supplied by Morso, and it appears to be very good quality.   I know how hot a flue pipe gets on a boat, and how close “things” can get to it.  In this kit the entire flue-pipe is double-skinned and insulated, which goes beyond the recommendations.  Money well spent ?  Well, as I understand it, these new regulations are advisory only, but in the case of a fire caused by a new stove installation after March 2011, a subsequent insurance claim may be prejudiced if the recommendations have not been followed.   So perhaps…. yes.

The fibreglass granite-effect kitchen work-surface is made “in-house” in a very tidy but rather smelly work-shop.  THE WHOLE TOP shown here is moulded in one piece, and that includes the moulded sink and drainer.  So, no joins whatsoever.  There is a choice of colour, my wife chose the mottled brown. 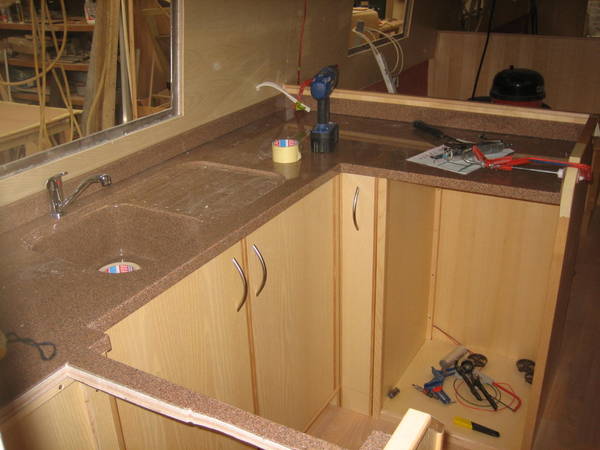 Only the splash-backs are constructed and fitted separately.  I ventured into the smelliest place in the factory to see them under construction:-

The same applies to the top for the bathroom vanity unit. 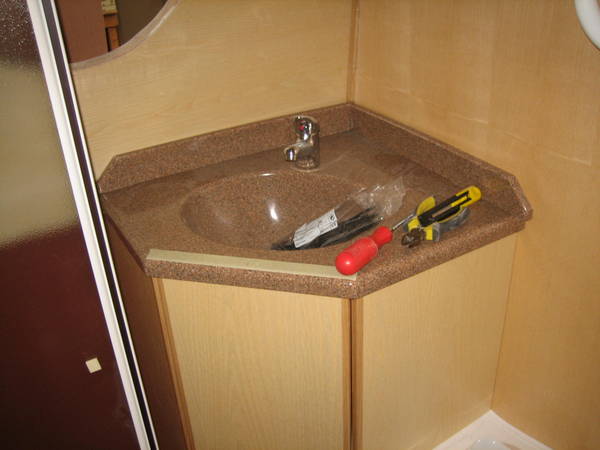 The water pump and accumulator are now neatly installed under the TV cabinet in lounge.

The brushed satin twin sockets which are now being fitted show obvious finger marks and stains.  I don’t like them, for mostly that reason, and ask for chrome ones to be fitted instead.  The chrome ones will also better match the window-frames and exposed water-pipes.  I don’t suppose they were too happy about that, but they didn’t show it, and they’re replaced on my next visit.

The engine is finally installed, along with much of the wiring:-

Externally the propeller shaft and skeg are being aligned:-

Meanwhile, in the electrics cupboard the power controller is installed, along with the 3KW inverter:- 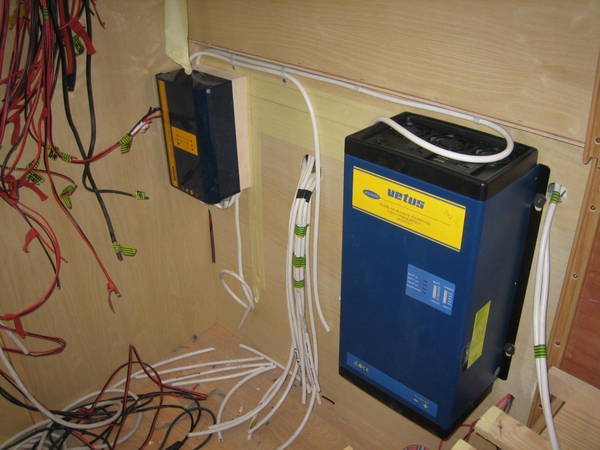 The power controller decides automatically from where the 240v power comes to supply mains to the internal sockets and equipment.  If shore-power is available, it’ll automatically use that.  If not, then the generated power from the engine will be used if available. If neither of those is available (and presuming the inverter is switched on) it will utilise the charge from the battery bank to power that inverter.

My boat is due to be shown at the Crick Boat Show in ten days time.  The pressure is on.  The lads are confident that it will be finished to their usual very high standard in time for Crick, but there’s a lot to do…..minor things…….like painting and sign-writing and installation of stove and lights and consumer units and throttle and control panels and batteries and cupboards and doors and carpet and windows and side-hatch and rubbing strake and rear seats and settees and …………

My next report will tell you if it was completed in time for Crick.