What it’s all about and Willington pubs too.

Good morning everyone and with the sunshine streaming through my windows and warming my legs up as well as the cockles of my heart it feels good so thought I’d share my ramblings. 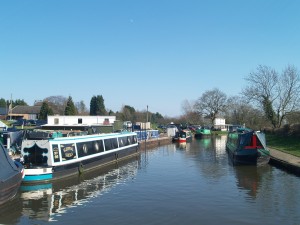 As you may have spotted yesterday was glorious so after checking my oil, water and gearbox fluid, on which I have a small drip come leak of which I’m keeping a close eye on. I decided it was time for a little mosey on down to Stenson to see how the gearbox acts under pressure. All looked quite good on my return with a couple of drips after about 3 hours cruising.

It was just so lovely to be out in the sunshine careering along at speeds of upto 2mph at times. As Paul said in his newsletter the sunshine just makes you feel like boating. There were quite a few walkers out with their dogs, it’s a well used bit of towpath round Willington, a popular place. There wasn’t many boats about really, I think I saw 4 others. It just felt lovely to be in the sunshine with a few ducks, robins and I saw the Oyster Catchers we have here at Mercia which were feeding in one of the many large puddles in one of the fields. Didn’t know we had oysters in the fields but I’m no orthadontist anyway. 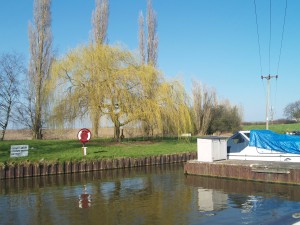 Thoughts of the summer were stiring and thoughts of painting the boat, I’m veering towards doing a cheap job myself as there are other things which are higher up the list of requirements if and when money is available. Must book in for a blacking.

Days like this are what makes it all seem so wonderful even if not all my life is quite how I’d like it but then………… Returned to the marina and call in for  a pumpout while I’m there then back to my mooring and a chat with others all enjoying the sun and the warmth. My thermometer on the back of the boat read 21C at one point and wasn’t in direct sunshine.

After lunch and resting a while it was time to sample some of Willington’s night life, and actually be a part of it too, as they have an open mike night which is now at the Rising Sun. I’d not been in before and it’s quite nice. Only went in the bar where the open mike was but a proper bar with a proper pub feel to it. Nice and clean with plenty of wood and a good selection of real ales, friendly staff and a friendly atmosphere.

Gordon, who lives at Mercia, had talked me into going up as he more or less runs it and sets everything up. I had been threatening to get out and play more at open mikes and folk clubs. I’ve become quite settled over the winter with just not doing a great deal and going to bed early but it was a good night and Ken and Keith a couple of my neighbours came up too. Some good performers there and I got to do 5 songs and had folks singing along with Paul Simon’s Mrs Robinson, Me You and Julio, then Lay Lady Lay, Light my Fire and threw in a Fred Astaire, I Won’t Dance and I thoroughly enjoyed myself. One or two thanked me and said they hoped I come again which made me feel good even taking into account the level of drinking which had taken place.

There were probably at least a dozen of us from the marina there all told and I assume the others were regulars and locals and all seemed friendly. A good night was had by all. 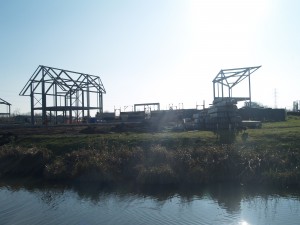 a social difference having a bar on site so there is a meeting place and people will get to meet more of the other moorers.

Right time for some studying as the Cheltenham Festival starts tomorrow and if I’m going to throw my money away on sick animals I will do it scientifically after spending hours working out why this horse can’t lose and that one can’t possibly win only to find out how wrong I was. No I won’t be putting my boat on any horses only small stakes but for me it’s the highlight of the sporting year.

Have a great time in the sun while we’ve got it and write you all soon.