Dr Martin Luther King once said to the world “I have a dream!”

Mine is a bit smaller than his. A little less grandiose and much more selfish. I want to live on a boat!

I have wanted it for nearly 30 years. In fact ever since I was a young airman snowed in at a (now defunct) base one winter talking with a friend about what we would do when our time was up. We both wanted to travel a bit and I thought about converting an old military ambulance. He suggested a sail boat to the Caribbean.  Another friend had a diving permit and we agreed it was the way to go and so… the dream was born!

However, with the thaw came postings, reality, demob and marriage and as the way of things we lost touch. But part of the dream remained.

When I was first married I hated spending a fortune in rent and looked longingly into living in a narrowboat. Designs, toilets (oh yes, the REAL gritty nitty!) and bow thrusters…..then the spouse said NO! NEVER! Unless I wanted to do it on my own!

Soooo…..fast forward 20+ years and thanks to a divorce petition I am now on my own. Except I now have a dog. A proper boat sized dog! A Jack Russell called Alfie. Also known as “Daftus Doggus” and “Cutus Caninus” (its “Dog Latin”…a bit like “Pig Latin” but house trained!) Although, when he decides to be a little bugger, I have threatened to change his name to “Spitroast” on occasion! 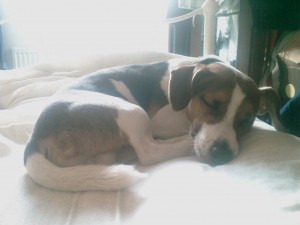 So I now have the freedom, the ships mascot and almost the cash.  I also have a name for her “Gypsy Lady”.

I was, because I realy want a widebeam, going to have a picture of a real Beryl Cook sized woman in swimsuit painted on the side and call her “Big Fat Annie” but not everyone shares my sense of humour so I fell back on “Gypsy Lady” with a suitable picture to be painted.

So here we go!

In this blog I will set out the ideas, the research, the quotes, quotations and quota of cock ups. If only because I like to laugh and if I can do so and you all learn from my mistakes so much the better.

If you read this far thankyou…you fool! Should have fled while you could! Now your boating soul is mine!

Actually, this post was merely a tryout and to introduce myself if you are not on the “Canal world” forum and do not know me.

The next will have a lot more “boaty bits” in it. So stay tuned.