It’s good Sunday morning as I write this so apologies but I’ve had a bit of trouble logging onto the site but all seems well now. 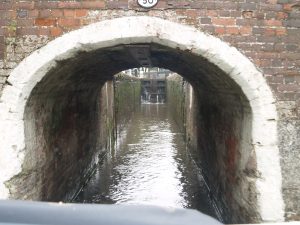 Friday morning dawned and I was up fairly early and after popping over to use the CRT facilities I was ready to move by about 11 am. The facilities are kept nice and clean and are well serviceable. The cafe looks quite good too but I didn’t sample their wares so I can’t offer you an opinion.

I poddled off my first lock which was the fourth one of the Fradley flight and someone coming up and a volunteer locksman too. I pulled over and shortly floated in and bid him a good morning and thanked him for his help. They don’t normally do the bottom one I think but as there was no one waiting behind me he went and opened the top gate for me before sorting out the 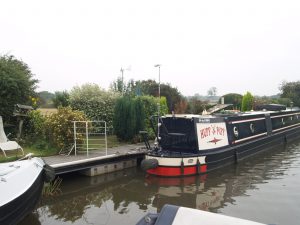 previous lock. The help we get from other canal users and the volunteers does help to lift your spirits and my opinion of our society.

Another boat was approaching as I pulled out but I wanted to top up with water and there is a tap on the lock mooring at the bottom so headed for land and the bit of breeze caught me so I had to do a bit of reverse and shuffling but made it safely in the end. Now this was a bit strange this tap. There were two locks a Squire and a Yale. I have keys for the Yale which took a bit of opening so was liberally doused with WD40  but after turning the tap no water was issuing from the bit of hose pipe dangling down or from another long nosed type of tap which wasn’t really easy to attach anything to as it was sat in a cut out in the metal. I should have took photos I realise now I’m trying to describe it. I didn’t appear to have any 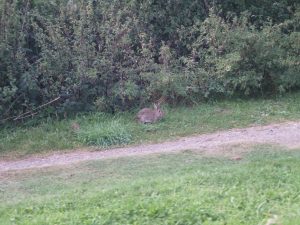 keys on my boat bunch that fitted the Squire so thinking I realistically should have plenty of water to last me a couple of days I gave up and set off. I must send an email to CRT in case it needs repairing or something.

Off we set in the beautiful warmth of another hazy summer day. Listening to the birds and watching for whatever wildlife was about and admiring the general beauty of the trees and plants. It was a pleasure just to be alive and experiencing the day as it unfolded. I was beginning to feel that I was unwinding at last. A short hop down to Common lock which if I remember rightly I had to do all by myself as there was no one there. Shock, Horror. 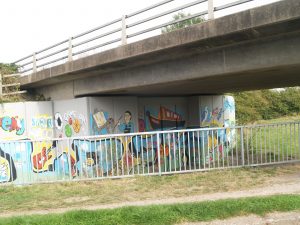 Down to Alrewas where the stanchions of the road bridge have been graffitiised, I think legally and authorised, I’m not sure whether I like or not. Bagnall lock and a good morning to a fellow boater who then walks past lock and offers to help when he sees I’m on my own, so many good folk about, I decline as I feel I need a bit of exercise and it’s only a shallow one so no real steel ladder climbing.

Down through the lovely village of Alrewas where quite a few boats were moored with gaps between which I kept looking at and wondering if I could get in. If they had moored closer to each other there would have been lots of room. Gave the impression of inconsiderate mooring. Not everyone is helpful and friendly we have to accept that but not join in with it. A little further down I found a space more than big enough and 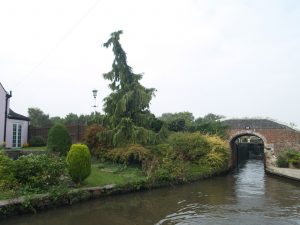 I pulled my boat back up about six feet of the boat behind. I’m glad I did as later someone else moored up in front of me and there was plenty of room between me and the boat in front.

Shopping bag in hand I set on the long expedition and dangerous expedition to find supplies. I was accosted by two nice ladies who wanted to know where the town centre was and could they get a coffee and I duly pointed them in the direction of the shops and a couple of pubs which I thought would be more than happy to supply them with a couple of cups instead of glasses unless they changed their minds and went for a tipple when they got there. It was past noon on the old sundial. The butchers, Coates I think it 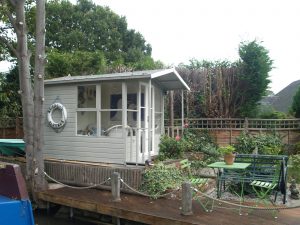 was, had real beetroot outside so I snaffled a bunch of that along with a bunch of tomatoes still on the vine and went inside. An extensive array of meat from the usual animals and different cuts laid out along with breasts and steaks that had already been marinated in various solutions. Me I wasn’t going to do much real cooking so smoked bacon, 1/2 a pork pie, 1 lamb burger and a pasty which looked like wholemeal pastry, I should have asked, which I had for lunch on my return to the boat. A quick walk a little further along to the Co-op for a dozen of the small wholemeal cobs, these are rolls, bread cakes, baps or other names depending on your place of birth, they exceedingly good as they are quite solid and not just light and fluffy. I like my wholemeal bread to have substance. 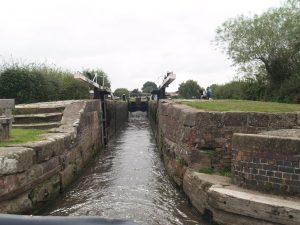 through the bottom lock and the boat and owner to go in as I come out was from my home marina of Mercia, he recognised the front of Steppin’ Out and I’d seen The Navigator before as we live on opposite sides of one the bays in the marina but hadn’t spoken before so good to get to know another fellow moorer.

Out on to Alrewas river section and into the wilderness of the reeds and tall grasses that line the first hundred yards or so of the canal/river as you turn off the river proper. I suppose this is customary of rivers to canals as the banks are tended on the rivers. I was thinking back to when we were on the broads many years ago, about forty or more years ago to be precise, it adds a charm and variety but does limit the view much more than on the canals. Down through the canal side moorings which look good and are in a 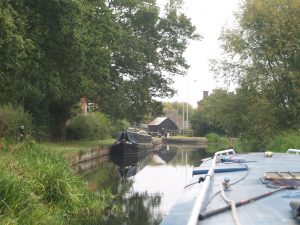 peaceful setting. On to Wychnor lock which again I had to do myself and then the first of the stretches of canal that run alongside the A38. The birds still sing and there is still a sense of peace amongst the roar of the traffic fifteen or twenty yards away. Barton Turn marina with it’s waterfront pub and shops. I will have to call in to sample the quality of their goods for reporting purposes one day.

I am now approaching Barton lock and there is a boat in the mouth of the lock having just come out. There are many people milling about and doing lock type things, raising or lowering paddles and pulling, pushing gates, I’m a bit far away to see exactly, but I can’t make sense of it. Why are they filling the lock behind a boat that has come through and with a boat coming down the canal towards them. I am for a moment non nonplussed, in fact my plussed hasn’t been so nonned for a while. As I get closer I realise what is happening but it’s the first time I’ve come across 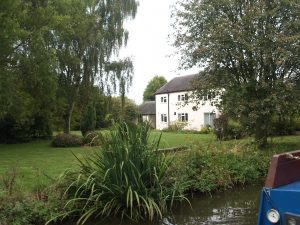 anyone who is actually towing another boat through a lock.

Into and out the other side where I again don’t moor up to close the gates but leave the boat in the mouth of the lock while a quickly close the gates but keep a watch on my boat too, just in case, but this has a long mouth so not much likelihood of it wandering away anywhere and off we set again. Now we’re back proper in what is familiar territory for me heading up to Tattenhill lock where I have helpers again who do the lock for me which I know makes it quicker for them too but is much appreciated. Before you get to the lock there is one of those bridges which is only seven foot wide gives you the opportunity to see how good your aim is, I got straight through with out touching the sides this time. 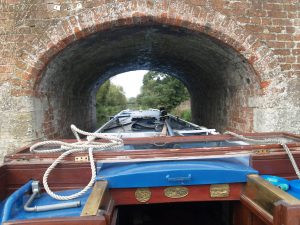 Now the day is turning into a lovely evening and no thoughts of a sweatshirt yet. On through Branston water park till the Bridge Inn appears which says Italian Pizza and Pasta Restaurant again I don’t know how good the food and service are but quite often a few boats are parked there so I think it’s popular. I sail on through Branston lock and look for my friends boat which is where I’m going to moor. He’s visiting friends in Derby otherwise we would have gone for a drink but we spoke about having breakfast instead as he’s off out travelling the cut shortly. After mooring up and a tuna fish salad with a portion of delightful pork pie I sit down to write my blog for you and horror. I am Forbidden access to the site. What has Paul found out about me? All the skeletons that are lurking in my closet I mull over but while I have done many things I’m not proud of I can’t think of much that would be get me banned. I’ve never even peed in the canal on my way back from the pub. I don’t leave litter, I don’t leave lock gates open.

It turned out not to be me but a bit of problem with spam so here we are again. One more blog to do for this trip after this one and I will try and blog a bit more often this coming year. 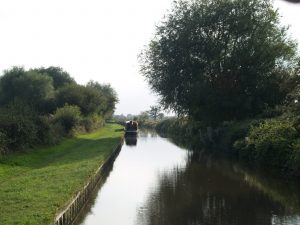 Photos; 1. Leaving my first lock of the day.  2. Moorings just below Fradley bottom lock.  3. The Wildlife. Question do you A. write a book about said wildlife, B. produce a film? or C. Make a pie?  4. The bridge art.  5. nice garden at Bagnall lock.  6. Alrewas, if you’re going to have a summer house you might as well have a good one.  7. Alrewas bottom lock.  8. Approaching Wychnor lock.  9. Looks idyllic from this angle and is lovely but the A38 is twenty yards the other side of the boat. 10. One of those narrow bridges.       11. My nights mooring, a bit too close to the main road but I still slept well.